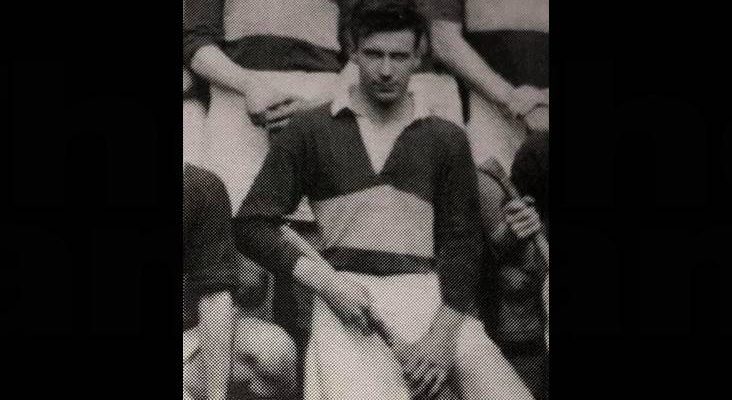 Tommy Ring was a hurling legend in Westmeath a pure natural hurler two sided hugely versatile one of Irelands Best goalkeepers a midfielder a half forward a corner forward and a leader. He was one of the leaders of the great revival in Castlepollard hurling in the late fifties winning a minor championship in 1956 as goalkeeper.

In 1961 he captained Castlepollard to the senior title beating a Clonkill/Delvin amalgamation in the final. Tommy scored 1-4 from the middle of the field.

He won a nhl div 2 title in 1962 and in 1964 was top scorer as Westmeath defeated Offaly in the NHL semi final and Laois in the final Both Games in Croke Park. Tommy won a railway cup medal with Leinster in 1963 and later enjoyed great success in Dublin

The following is an extract from a profile of the late Tommy Ring compiled by Gerry Buckley for his series on former Westmeath hurlers and footballers for the Westmeath Topic in 2000 entitled ‘Where are they now?’

When the surname Ring comes up in hurling conversations, images of the late great Christy come to mind, but for almost two decades Westmeath had its own maestro with the camán, Tommy Ring, who was a top class goalkeeper-turned-forward and a rare Railway Cup winner from the county.

Ironically, Tommy’s great grandfather was a brother of the grandfather of the legendary wizard from Cloyne, and Christy’s photograph adorns the mantelpiece in Tommy’s lovely home in Rathcoole, Co Dublin. Indeed, he keeps in touch on a regular basis with Christy’s brother, Willie John, now aged 82.

Tommy Ring is a native of Castlepollard and is the son of a Cork father and Louth mother. His father, Cornelius, was a garda and died, aged only 48, in 1950, a tragedy compounded by the very young deaths of his sisters Marian in 1954 and Helen in 1977. Tommy was educated in Castlepollard National School and later the ‘Tech’. He hurled with Westmeath minors in 1954 and when he moved to Cork he played with the Meelin club as a junior. On his return to ‘Pollard he won a county minor medal in 1956 and was promoted to the Westmeath senior team as goalkeeper at 18 years of age, a position he retained on and off for a further seven years.

However, Tommy always wanted to hurl outfield and his patience was rewarded in the Leinster SHC defeat by Carlow in 1963, scoring 1-1 when moved to the forward line during that game in Portlaoise. And he never looked back, becoming a top inter-county marksman throughout the remainder of the 1960s and early 1970s.

On the club scene, Tommy suffered the heartbreak of two county senior final defeats to Castletown-Geoghegan in 1958 and 1960, but had the honour of captaining his club to victory over St Patrick’s in 1961, finishing with a personal haul of 1-4 from his midfield role. He feels that ‘Pollard should have perhaps won more titles and gives a lot of credit to team trainer, Ronnie Plant, for their success. “He was a great man and we were all afraid of him,” Tommy recalls.

In 1962, work brought Tommy to Dublin, where he hurled for New Irelands for three years. After a year’s sojourn back with Castlepollard, Tommy joined Crokes in Dublin, with whom he won two senior championship medals in the capital in 1974 and 1976. He continued playing up to 1978 and founded the juvenile section in Rathcoole Commercials in 1977, which is still going strong.

One of his sons, Connie, emulated his father by winning a Dublin SHC medal in 1998 with Craobh Chiaráin. Tommy is adamant that Connie is well worth his place on the Metropolitan senior side and concurs with the general nationwide opinion that the game of hurling needs a competitive Dublin team. His two other sons, Ted and Killian, “both hurled but gave it up”, while all of his three daughters, Eimear, Martina and Marion, play camogie. His wife, Therese (née Hiney), is a native of Offaly, and is herself a former camogie player with Two Mile House in Kildare. She is a distant relation of former GAA President, Seamus Ryan.

Therese’s Faithful County roots remind Tommy of many memorable clashes (for a variety of reasons!) with the men in green, white and gold. Tommy was rarely on a Westmeath team which lost to Offaly and, while full of praise for what our southern neighbours have achieved, he is convinced that the Lake County had the necessary hurlers in his time to make the big breakthrough prior to Offaly. He has always felt aggrieved that when National League Division 2 titles were won in 1961 (the final wasn’t played until 1962) and 1964, that the Westmeath County Board did not  avail of the opportunity to move up to Division 1, thus gaining invaluable match practice against the top hurling counties.

A rare championship thrashing by Offaly in Mullingar in 1966 was well and truly avenged the following year in the infamous ‘Battle of Birr’ on an afternoon Tommy recalls that when a black cat ran out in front of him en route to the match, team-mate Davy Nolan said, “This is going to be our day”.  Tommy reels off the names of Westmeath colleagues from the 1960s, whom he is convinced “would have won a Leinster title long before Offaly, if we had got those five or six League games against the Tipps and Corks”.

“Paddy McCabe, Tommy Walsh, the ‘Jobber’ (McGrath), Declan O’Sullivan, Brendan McMahon, the Dalys from Collinstown, Jack Power, Pat Jackson and Johnny Duffy – they were great hurlers”, Tommy continues. Towards the end of his career, on a day he recalls a great display of net-minding from Ollie Gallagher, whom he calls “a brilliant goalie”, Tommy scored 0-10 against Offaly in Birr in the 1971 Leinster SHC, a feat repeated by Michael Cosgrove in Croke Park five years later, both against Padraig Horan, who went on to lift the Liam McCarthy Cup in 1981! To this day, Tommy feels that some of the recent Westmeath county finals have produced great hurling “and if all clubs pulled together, they could still win a Leinster”.

Tommy had the privilege of playing with and against many excellent hurlers. These include Kilkenny’s Sean Clohessy, Denis Heaslip and Eddie Keher; the Boothmans and Billy Jackson, Fran Whelan and Des Foley of Dublin; Christy O’Brien, Jimmy Lyons and Ollie Fennell from Laois. Within Westmeath, Sean Kirby (“a sticky little fellow”), Mickey Flanagan and Jimmy Rooney (“who’d try his heart out for you”), Danny Mulligan and the Williamses, as well as Tommy Bolger, are other players he admired.

In the modern game he dislikes the big hurl used by goalies. “There should be a standard hurl all round. I remember Ollie Walsh producing this big shovel against us in 1960”, Tommy reminisces. His favourite cúlbáires of all time were Tipperary’s Tony Reddan  and Seanie Duggan of Galway. “You must remember those lads had great men in front of them and nobody got near the ‘keeper”, he laughs. Like many former greats, Tommy dislikes the ‘back door’ system and feels an alternative system should be tried out, while maintaining the status of the Munster and Leinster finals. He is convinced that “the National League is dead on its feet”.

Another previously prestigious competition, the Railway Cup, gave Tommy one of his sweetest memories. After being sub goalkeeper in the early 1960s, Tommy played for Leinster and got on the scoresheet in the 1964 semi-final victory over Ulster, but he was replaced for the final when Munster were defeated. “The Wexford fellows were great to me, the likes of Ned Wheeler, Jim English and the Rackards, as well as Eddie Keher of Kilkenny. The craic was good and it’s sad to see the decline of the Railway Cups, but they should be kept going,” Tommy reflects.

He was also honoured to play in the Cardinal Cushing games in 1967 in New York, with Des Ferguson of Dublin, Tipperary’s Donie Nealon and Jimmy Conroy from Galway, and was unfortunate to lose out the previous year by one vote, for a trip made by Christy Ring. Modern players to impress Tommy include DJ Carey and Brian Whelahan, while he admires Andrew Mitchell, Sean McLoughlin and Christo Murtagh, from the current wearers of his beloved maroon and white. He travels to see Westmeath play whenever convenient and sings the praises of the Kilcoyne brothers, Michael and David, from the promising days of the mid-1970s to mid-1980s. “There should be more money spent on the hurlers. Maybe get them a week away together to build team spirit”, Tommy suggests.

He is fulsome in his praise of the dedication to hurling by the late county chairman, Eamon Moynihan, and hopes for similar initiatives by present and future county board officials. “The game has changed with the pre-occupation on fitness. You should hurl to get fit, not get fit to hurl,” Tommy opines, “and outside coaches are needed to teach the skills of the game to kids in Westmeath.” The hard work of Pat Murtagh in Castlepollard Vocational School is the way forward, according to Tommy.  Despite all the hype about fitness, he is amused by modern players being rested as he thought nothing of “playing half a match for New Irelands in Croke Park, being whisked off to Tullamore by Paddy Flanagan, and then playing a full game for the county”.