Official Westmeath GAA website | GAA News & Results > Football > The power, the glory, and the defeat of the Kingdom 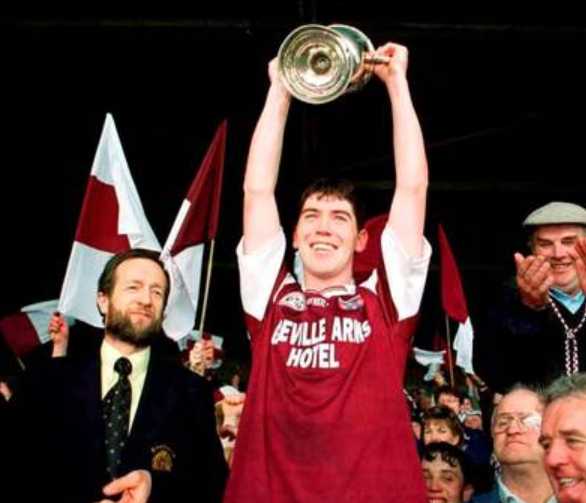 Many months after Aidan Canning had been presented with the All-Ireland U21 football trophy by then-Munster Council chairman and now-MEP, Sean Kelly, Westmeath team manager Luke Dempsey (we will always owe him an enormous debt) told me of his astonished reaction to the missing of the ‘gimmiest’ of ‘gimme’ frees by Kildare sub Colm Reilly in the Leinster championship first round replay in Cusack Park on March 13, 1999.

The seemingly un-missable kick to win the match for the Lilywhites tailed wide as many disillusioned home fans were buttoning their coats and approaching the exit gates to head for nearby hostelries, to share tales of, “ah, the same old story,” with their fellow Doubting Thomases.

Nine weeks to the day later, after some heart-stopping encounters and having enjoyed a fair degree of help from that most important of 16th men/women, Lady Luck, said hostelries were virtually empty as hordes of Doubting Everybodies congregated in Limerick for an occasion which will live forever in the memory of those in the attendance of almost 10,000 (including a handful of green and gold-clad supporters/‘animals’? – sorry Páidí!), when ‘little old Westmeath’ came, saw and conquered a very highly-rated Kerry side. Indeed, a glance down the Kingdom XV shows future household names such as Tomás Ó Sé, Paul Galvin, Mike McCarthy, Tom O’Sullivan and Tadhg Kennelly.

In fact, the hostelry which nearly ran out of refreshments that day was the now-defunct Davin Arms on the Ennis Rd, where throngs of maroon and white-clad fans congregated inside and outside the landmark pub, before and after the match. Yours truly was privileged to be part of the Midlands Radio Three pre-match team in situ, interviewing all and sundry. As the Westmeath team bus passed en route to the game, a thunderous roar greeted our heroes. You could already sense that we were going to witness something special. And we did!

Tempus fugit and as May 15th marked the 20th anniversary of that wonderful Shannonside occasion, the culmination of a seven-match campaign where we often rode our luck before ultimately defeating the kings of Gaelic football by a three-point margin which unquestionably flattered the losers.

Let’s reflect briefly on each stage of that epic journey.

It was the incomparable Dessie Dolan who rescued Westmeath’s bacon (now where did we read that before or since?) with a fabulous late 40-metre free to deny 14-man Kildare on their home patch. Indeed, Dolan stood out all through, his unique ability to earn frees – and then convert them – proving crucial.

The aforementioned miss by Reilly earned Westmeath an extra-time reprieve in a thrilling replay in Mullingar. It needed a goal apiece from skipper Canning and the educated left foot of Joe Fallon to edge the home team to a Leinster semi-final. The prospects were good at this early juncture. You know what they say about a team’s name being already on a cup…

It was back to St Conleth’s Park again for Dempsey’s young charges where they edged out a fine Wicklow team in a memorable provincial penultimate round tie. Brian Lambden’s magnificent injury-time point sealed the win, before Wicklow’s indiscipline robbed them of a glorious chance to score a last-gasp equaliser.

The multi-talented and versatile Shane Deering was now on board. In a period when unforgettable contests at underage levels between the Lake and O’Moore counties were the norm, this was another. Westmeath hearts almost stopped when ‘Beano’ McDonald’s shot came back off the upright with time almost up, but a draw was a fair result.

Winning fans were singing and dancing in the rain in O’Connor Park when Canning became the first Westmeath man to be presented with the Leinster U21 cup (by Nicky Brennan) after a classic ‘game of two halves’. Fallon’s 12th-minute goal, after a Dolan free wasn’t cleared, proved to be the decisive score.

After what was a truly intense provincial campaign, the All-Ireland semi-final proved remarkably straightforward for the Leinster champions against their Ulster counterparts. Delightful goals in the first half from Fergal Wilson, the baby of the team, and that man Dolan, helped Westmeath qualify for the decider against a highly-vaunted Kerry side which, worryingly, had destroyed Roscommon in the other semi-final.

Seldom has the tweet of a final whistle sounded as melodic as that of Armagh referee Brendan Gorman on that historic day in the Gaelic Grounds. Cathal Mullin’s great save from Ian Twiss’ penalty remains a highlight of an afternoon that Lake County football came of age. When presenting the trophy, Kelly (himself a magnanimous Kerryman) used the musical words of Westmeath’s most famous son, Joe Dolan, in hoping that Westmeath would win “more and more” in years to come. The journey home to Mullingar was a long and joyous one. Very long and very joyous!

Let’s salute the never-to-be-forgotten heroes of the Gaelic Grounds on Saturday, May 15, 1999: