The Hynes name lives on at Coláiste Mhuire, Mullingar 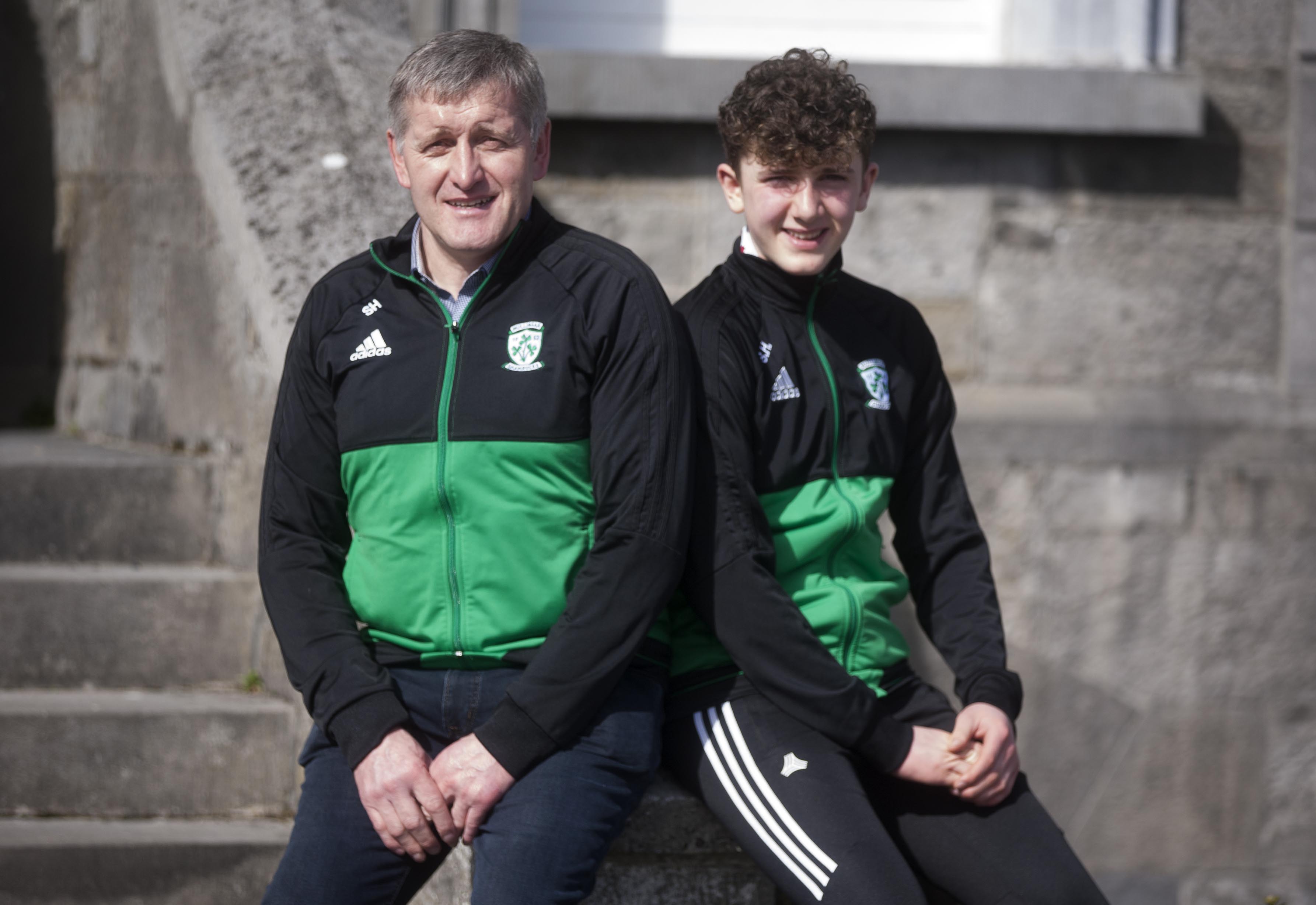 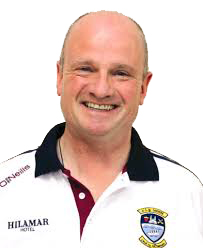 “Come on over to the school. This may never happen again.”

It is exactly 35 years ago as of last Tuesday (March 27, 1983), but I vividly remember overhearing these words from legendary Galway full forward of the 1960s, Sean Cleary, on the steps of the Cathedral of Christ the King. They were spoken to a past pupil of his in Coláiste Mhuire encouraging the alumnus to join in the celebrations for the Mullingar’s school historic Leinster senior football ‘A’ title, won earlier that afternoon against Marist College, Athlone.

Unfortunately, the three in-a-row All-Ireland winner’s fears have been proven correct – to date – despite losing final appearances in 1987 and 1988, but the junior footballers from the school are now just an hour away from accomplishing an even greater feat by bringing a first ever All-Ireland ‘A’ trophy to the town.

Courtesy of the Westmeath Examiner and Gerry Buckley

Indeed, when Carmelite College, Moate’s three memorable Hogan Cup successes in 1976, 1980 and 1981 are analysed, there was an ‘outside’ element in all three wins for the now-defunct boarding school. Accordingly, if the young men in green triumph in Bansha next Saturday (throw-in 3.30pm) against St Brendan’s, Killarney, they would become the first all-Westmeath outfit to lift a colleges ‘A’ national trophy.

Despite the enormity of what lies ahead, sub goalkeeper Sean Óg Hynes was calmness personified when we met up on Sunday night in the company of his father, Sean Snr (known far and wide as ‘Seanie’), the man who famously held aloft the blue riband trophy of Leinster colleges football on that never-to-be-forgotten afternoon in Kinnegad. 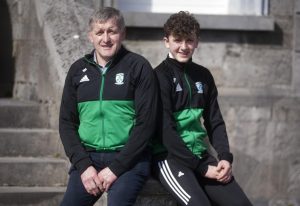 Sean Hynes Snr and his son Sean Óg, a panellist in next Saturday’s junior football squad which will contest the All-Ireland  ‘A’ final, outside Coláiste Mhuire last weekend.

“There has been a huge buzz around the school since we beat the ‘Bish’ (St Joseph’s Patrician College, Galway) in the semi-final and we just can’t wait for the final – the teachers, the management, all the lads on the panel. Ever since that game in Ballyforan, the place is gone crazy and everybody is thrilled,” Sean Óg stated at the outset.

Undoubtedly, there was an expectation that the management trio of Brian Murtagh, Sarah Guilfoyle and Mattie Dempsey had a very talented panel of players at their disposal this season, the same

group having won provincial juvenile honours two years ago. Despite this, Sean Óg was keen to emphasise: “Mr Murtagh brought us back down to earth at the start of the year and said, ‘we are taking this one game at a time’.” This philosophy has served all and sundry well, and victories against Moate (Community School), St Mel’s (Longford), St Mary’s (Edenderry), St Patrick’s (Navan), Naas (CBS), Coláiste Eoin (Stillorgan) and the aforementioned St Joseph’s (Galway) have meant that joint captains Enda Gaffney and Trevor Keena have more than a fighting chance of lifting the Paul McGirr Cup next Saturday.

Sean Óg continued: “School is closed this week, but we are training on Wednesday and will probably have a light session on Friday. Our managers have their homework done on St Brendan’s, but we will be concentrating on our own strengths. We know they have a great tradition and have won the last two Hogan Cups, but the lads we will face are not the same lads that have won those two cups. They are the same age as us and we have nothing to lose.

“There is a great confidence in the squad and it would be a fantastic achievement for the school, and the clubs of all the players involved, if we win. We have had great support during the campaign from so many people, including lads’ parents and grandparents.” The latter comment led to a jovial chat about one very well-intentioned, but occasionally over-exuberant, grandfather!

In conclusion, Sean Óg lauded the backing he and his colleagues have got from the school principal, Malachy Flanagan, himself a former successful manager of football teams in the school: “Mr Flanagan has even got texts from county players telling him how much they are behind this team.”

His understandably proud dad, Seanie, is thrilled with the current juniors’ campaign and still fondly recalls the heroes of 1983 and, indeed, other sides he played on during his own schooldays at the Hevey Institute. 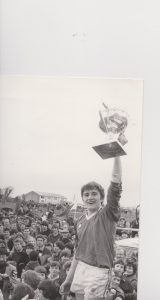 He opined: “They were great times really. I was only 15 when I played in the 1981 Leinster final against Carmelite College, Moate. It was a huge thrill to be in a final, but very disappointing to lose in front of a massive crowd in Cusack Park by 1-6 to 0-5. We were very disappointed with our performance on the day, but we had some good players coming through the ranks and eventually we won in 1983 before another huge crowd in Kinnegad.”

Seanie then sportingly took time to put football into its correct perspective: “A supporter from Marist had been run down by a bus before the game and it put a bit of a damper on the celebrations.”

He continued: “The final was culmination of three games in a week, as we had played St Aidan’s (Whitehall) in a semi-final on the Sunday and the replay on the Wednesday, before facing the Marist the following Sunday.

“We went on to lose the All-Ireland semi-final to (champions-elect) Coláiste Chríost Rí (Cork) in Cloughjordan by four points (2-7 to 1-6). They got a goal in the last minute to put a gloss on the scoreline. We were pressing and lost the ball, and they came up and got a goal. It was uncharted territory for us, but we were up for it. We were as good as them, but were on the wrong side of the result. The campaign was a great experience. We had the whole town and lots of the county supporting us, and it was unbelievable to see so many people supporting us.”

Seanie was fulsome in his praise of the 1983 management triumvirate of Richie O’Donoghue, Sean Cleary and Frank Dillon. He greatly enjoyed the 20-year squad reunion in 2003: “The former headmaster, Bro Keegan, was alive then. Hopefully, we will have a 40th reunion in five years’ time. I still keep in touch with many of the lads. All are alive and well, thank God, and I stayed with (goalkeeper) Stephen Fagan when Westmeath played down outside Waterford in the National Football League last year.

“I have attended two of the junior games this season and, having watched a lot of those lads coming through, I am not surprised at all at them getting to the All-Ireland final. There are players on that team who are as good at underage as ever I have seen in Westmeath,” Seanie concluded. High praise, indeed, from the current Mullingar Shamrocks chairman, himself one of many of the 1983 senior side to go on and represent Westmeath with distinction in the years after he left Coláiste Mhuire.

In all likelihood, a significant number of the 2018 junior team will go on to wear the famous maroon and white county colours. However, for now, their sole focus is Bansha next Saturday when the college famously known as ‘The Sem’ stand in Coláiste Mhuire’s way.

A school, a town, umpteen local clubs, and a county hold their breath.