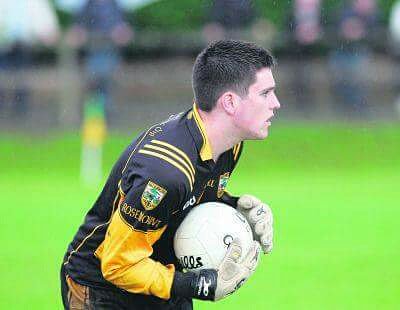 Q&A with Westmeath and Rosemount goalkeeper Eoin Carberry who was named on the Irish Independent’s Division 3 Team of the Year for his performances which included an injury time penalty save away to Derry that gave us the win.

Do u have any superstitions? Always sit in the same place in the dressing room

What’s the best advice you’ve ever been given? Play football as long as you can because your playing career is far shorter than retirement.

Can you tell us one random fact about yourself? Reigning long kick champion of Westmeath but it was back in 2011. They haven’t held one since.

What 3 people in the world would you invite for dinner? Rita Ora, Mo Salah and Kenny dalglish

Biggest disappointment? Losing to Longford in the U21 championship back in 2011

Who from the current Westmeath squad is most likely going to be a 1. manager, 2. millionaire and 3. in media? 1. Jamie Gonoud 2. Callum McCormack 3. John Heslin

If you could play an All-Ireland final or Leinster final in any stadium outside of Ireland, what stadium would you choose? Anfield

Who’s the most famous sportsperson you’ve ever met? Gianfranco Zola

What’s the greatest game you’ve been to in any sport? Rosemount U14’s 2 years ago in the county final in Moate against Kilbeggan were getting bet by 10 points with 5 minutes to go but came back and won. Will always stick out in my mind as they never gave up.

Have you ever shown any ability in another sport and would you like to have pursued it? Pool maybe but never had time to pursue it

What’s the biggest sacrifice you’ve made because of your county involvement? Missing out playing with the club throughout the year

What part of training or games do you dislike most? I hate running in training and last five minutes of the game when there is one or two points in the game

Who is the joker in the group? Frankie Boyle

3 words to describe yourself? Talkative, happy and motivated

Favourite Sunday Game pundit? Joe Brolly – says it how it is

If you could be any person in history? Jack Carberry