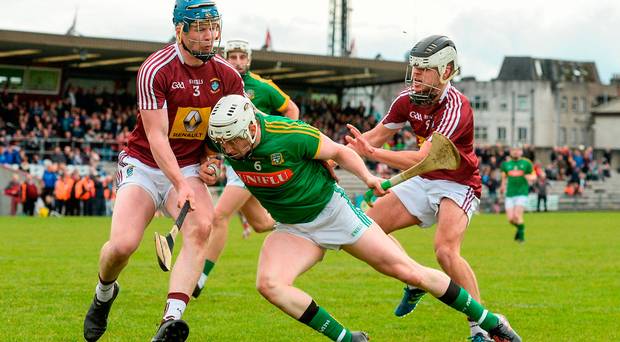 Westmeath’s senior hurlers now sit proudly on top of Division 2A of the National League after a hard-earned win over Meath by the narrowest of margins in Trim last Saturday afternoon.

There was very little between the sides in the first half, but three late points helped the Royal County to a 0-11 to 0-8 lead at the interval. Michael Ryan’s troops clawed their way back in the third quarter and the teams were level at 0-14 apiece when John Gilligan pounced for a crucial goal in the 55th minute. However, the outstanding Jack Regan scored a quick hat-trick of points to cancel out the goal by the Fr Dalton’s man.

Five unanswered points by the men in maroon and white looked like they would get the Lake County over the line, but a converted free and penalty by Regan in added-time made for a nail-biting finish. The same player was narrowly wide from a last-gasp monster free, allowing Westmeath to travel to London next weekend knowing that a win in Ruislip would guarantee them a place in the decider.