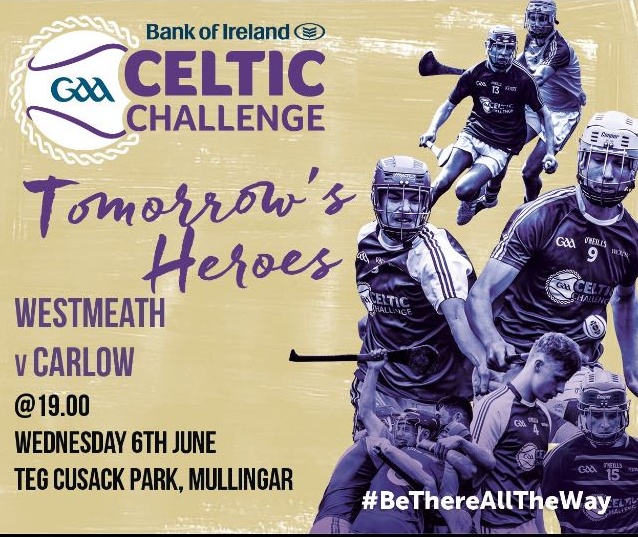 Our County Celtic Challenge Hurling team played Carlow in their last group game last night in Cusack Park. In a game which had great displays of hurling from both teams the first half was dominated by Westmeath. In the first half of hurling Westmeath use of the ball was sublime creating scores that wouldn’t look out of place in the Netwatch Cullen Park this Saturday. Jack Gallagher was Westmeath’s brightest spark in the first half scoring 3 points all from play and being involved in everything good Westmeath did. Westmeath’s Midfield and Half Forwards brought great energy to the middle 3rd in the first half which had a huge influence in giving Westmeath a half time lead of 1-11 to 1-4. Just before the break Westmeath’s man of the match Jack Gallagher picked up a nasty injury to his arm and had to be taken off, we all wish Jack a speedy recovery and as you can see he was back at the end of the game to collect his award. 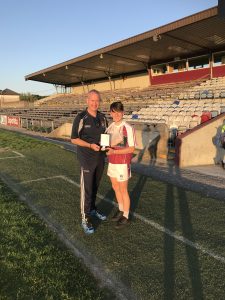 In the second half Carlow came flying out of the blocks and in an energy zapping evening in Cusack Park Westmeath found it out hard to live with there energy. With 10 minutes to go in the game Carlow had took the lead. Westmeath pushed on and had two goal bound efforts saved by Carlow goalkeeper Conor Tracey who had an fantastic game between the posts. Conor Murphy scored two long range frees to keep Westmeath pushing to draw the game level but in the end lost out by 3 points with the score line 1-14 to 3-11 at the final whistle.