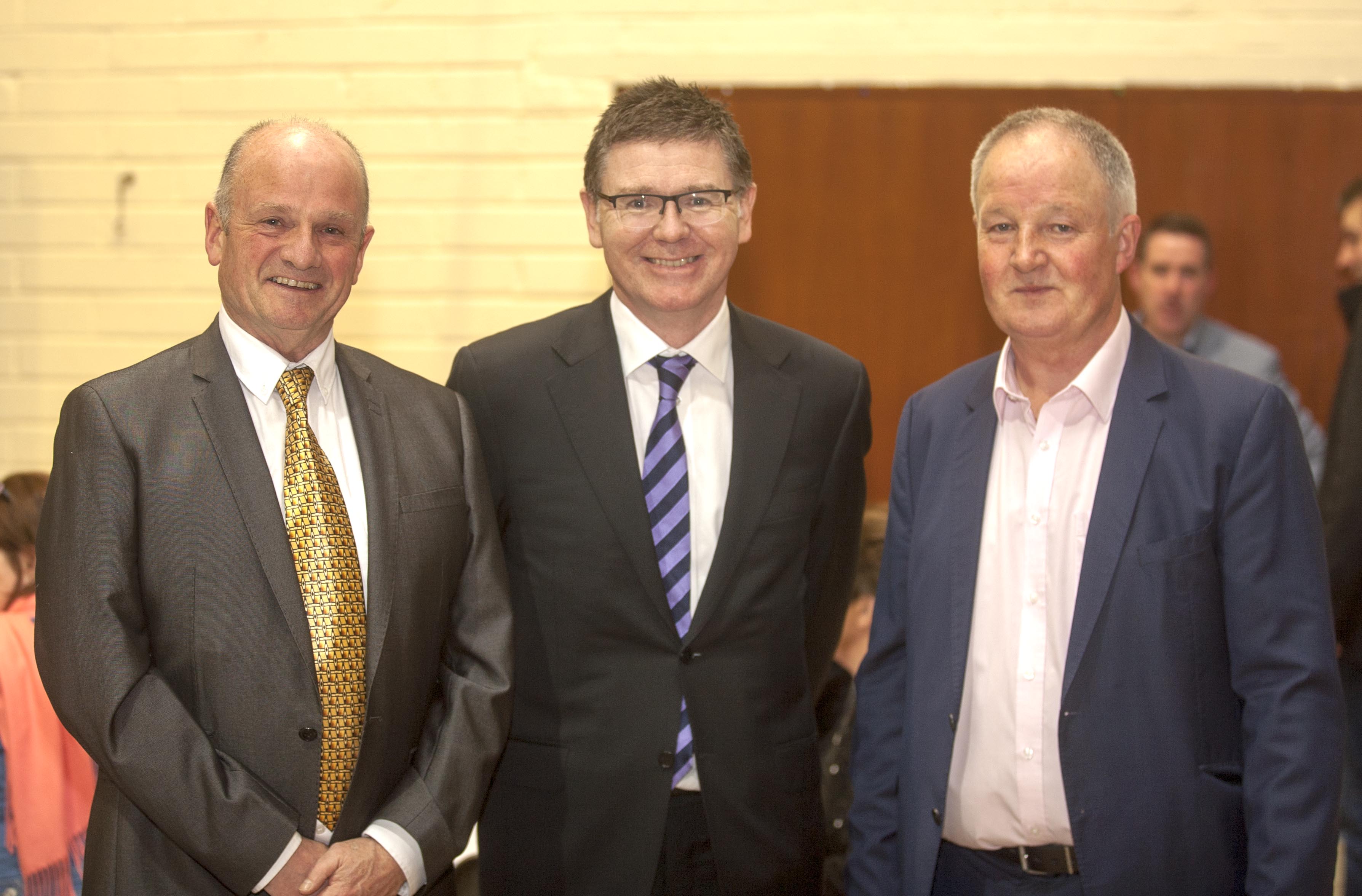 Gerry Buckley, Tom Ryan and Aiden McGuire at the launch of the book to celebrate 125 years of The Downs GAA Club.

Courtesy of the Westmeath Examiner

Exactly eight months after taking office as Ard Stiúrthóir of Cumann Lúthchleas Gael, Tom Ryan was the guest of honour at a packed clubhouse in The Downs last Saturday night to launch the progressive club’s 125th anniversary book, which covers in detail many aspects of football, male and female, as well as Scór – in which the club has won five All-Ireland titles – and a range of other GAA and community-related activities.

The very impressive publication, co-written by long-time club stalwart Aiden McGuire in conjunction with Westmeath Examiner columnist, Gerry Buckley, with the invaluable assistance of umpteen contributors who supplied old and new photographs, was loudly praised by all the speakers during the formalities.
Guests included a range of former players and club officers, including the captains of the most recent eight of The Downs’ nine Westmeath SFC titles won between 1968 and 2005, while the 1918 winning skipper Peter Moran, was represented by his son John. However, the oldest attendee was former player, nonogenarian Michael Murtagh, who was the recipient of a rousing ovation.

A very efficient MC for the night was former Downs chairman Patrick Doherty, a friend and work colleague of Mr Ryan in Croke Park. Current club chairman Brian Murtagh briefly welcomed all and sundry before Frank Mescall, vice-chairman of the Westmeath County Board (deputising for the unavailable chairman Billy Foley), addressed the gathering and duly amused/confused many in the hall with a cryptic CSI reference!

Following the presentation of Westmeath ACL Division 3 medals by Messrs Ryan and Mescall to worthy recipients or their representatives, Mr Doherty spoke again and praised Messrs McGuire and Buckley for their dedication to a project which was initially started in 2015 but only really came to fruition when Mr McGuire finished the ‘day job’ last March, enabling him and his joint-author to dedicate countless hours to the book in the interim.

Mr McGuire took to the podium and immediately called the book “a labour of love”, before adding to giggles from the floor, “I’m not sure about the love, but I am sure about the labour!” He was keen to stress that the book was “not a history, but a celebration of 125 years – a book of recollections about one of the best clubs in Westmeath and Leinster”. He thanked a range of contributors, making a point of acknowledging the use of the Westmeath Examiner and other newspaper archives, those who proofread the scripts, as well as graphic designer Damien Jameson and printer Tony Glennon. He ended by thanking his wife Carmel, daughter Sarah and son Kevin, for their “patience in allowing me to take over three rooms of the house since March”.

Mr Ryan formally launched the book after lauding the club on its 125 years in existence. “It is some achievement”, the Carlow native stated. Having had a sneak preview of the book earlier in the week at GAA headquarters – the precise timing of which was the subject of good-humoured banter between Messrs Doherty and McGuire – he congratulated the club on its many on- and off-the-field achievements over a remarkable century and a quarter. “Medals are not the whole story,” he emphasised, a theme highlighted throughout the formalities, the club now proudly possessing facilities on a par with any club in the land.

Bound copies of the book were presented to representatives of the club’s main sponsors over the years, Flynn Fuels and TEG.
Finger food was then served as many young and not-so-young in attendance shared stories of the great days of black and amber-clad sides, with a plethora of recent underage victories auguring well for more glory days ahead at senior level.