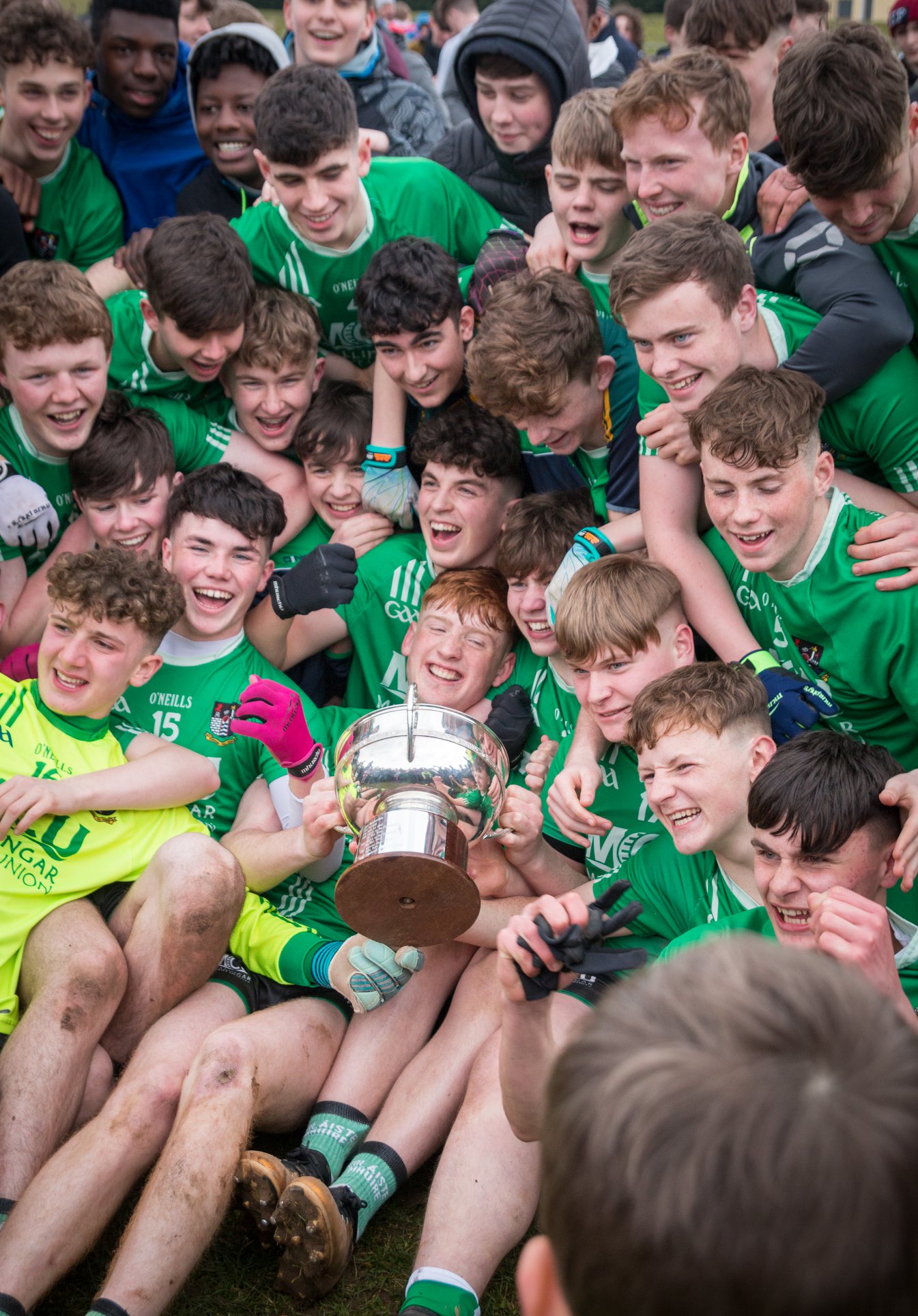 (One scoreboard inside Bansha, Tipperary)

“This is a fairly basic set-up for an All-Ireland final.”

The above words were my initial reaction, after what had seemed like a never-ending drive, on arriving at the Galtee Rovers pitch in Bansha circa 2.30pm last Saturday. They were relayed to the father of a Coláiste Mhuire player who was about to play in the biggest game of his sporting life to date. It was in no way meant to be a slight on the locality, but I felt that the Paul McGirr Cup showdown deserved a better-known venue and some of the trappings that go with same e.g. a covered stand. En route, it had taken a long time for an actual sign for Bansha to appear, prompting my latest vain attempt at wit when asked, “What’s after Golden?”, to reply, “I’m not sure, but silence is before it!”

Surely a pre-match parade would have added a sense of importance to the occasion? Certainly, a blast of Amhrán na bhFiann should have been forthcoming, live or on tape. The scoreboard read ‘Mgar’ and ‘Sem’, the latter the well-known term for the famed St Brendan’s, Killarney, Hogan Cup champions for the third and fourth times in 2016 and 2017 respectively. The Sem’s first win came in 1969 with the legendary John O’Keeffe as skipper, while the second came in 1992 with the majestic Seamus Moynihan on board. And, of course, the hugely – and justifiably – hyped David Clifford starred in the two most recent wins. ‘Mgar’ represented Coláiste Mhuire, just once a Hogan Cup semi-finalist (in 1983).

Indeed, one could detect an element of traditional arrogance ahead of a Kerry v. Westmeath clash in Gaelic football. The same arrogance I detected on May 15, 1999, when Goliath faced David in the Gaelic Grounds in Limerick with the All-Ireland U21 title at stake. Does anybody remember the outcome of that alleged formality? As the late Liam Campbell once said on RTÉ, “Answers on a postcard please, and the first one opened will be declared the winner.” The same arrogance which summarily ended my reading of Colm Cooper’s autobiography at page 167 of the 296-page tome when the ‘Gooch’ wrote in relation to the Kingdom’s lucky Qualifier escape from Cusack Park in 2012, “But it had taken us over half an hour to register our first score from play. Against Westmeath! It felt as if we were going nowhere.”

This columnist’s earliest memories in life are of going to – and immediately loving – colleges’ football games with my since-deceased father Des, a teacher for over four decades in the once-mighty football nursery of St Finian’s, Mullingar. Embarrassing as it is to relate now, given the massive swing in their respective big ball fortunes, there was a football snobbery evident in the Meath diocesan school up to and including my time as a pupil there (late 1960s/early 1970s) and an accompanying reluctance to even play a challenge match against the local St Mary’s CBS, as the school was then known. This particularly puzzled me as I was all-too-aware that, with the very odd exception of a talented Cavan, Meath or Offaly boarder, the players in St Finian’s were no better than guys I had soldiered with in the CBS primary school who had made the tiny journey as teenagers to the Hevey Institute. Fast forward to 2018, and Coláiste Mhuire have become perennially competitive in all Leinster ‘A’ championships, while the once-feared black and amber colours ply their humble trade in ‘D’ competitions, through no fault – it must be said – of a handful of dedicated teachers on the old Longford Rd (as across the road, my father turns in his grave).

St Finian’s demise mirrors the general decline in the footballing powers of boarding schools. St Mel’s, Longford, to the credit of all concerned, still field an ‘A’ side, albeit an unmerciful hammering in the race of the Bro Bosco Cup this season is light years removed from their heady days of the 1960s, and occasionally thereafter. Roll of honour kingpins, St Jarlath’s, Tuam, won their 12th and last Hogan Cup as far back as 2002 when Michael Meehan and co dazzled all and sundry. Nowadays, the race for the blue riband of post primary schools football tends to be wide open and next Saturday’s showdown between St Ronan’s, Lurgan and Rice College, Westport guarantees a new name on what is the third trophy dedicated to Bro Thomas Hogan. Indeed, the respective Ulster and Munster champions will be the 41st and 42nd teams to contest a Hogan Cup final, and the new champions will be the 28th in the 65th staging of the competition.

At 5pm last Saturday, the aforementioned scoreboard read, ‘Mgar 1-12 Sem 0-13’, as green-clad throngs celebrated a truly fantastic win by the self-proclaimed ‘Westmeath’s Green Army’. All being well, please God, the young junior heroes currently under the tutelage of Brian Murtagh, Sarah Guilfoyle and Mattie Dempsey, will develop into excellent senior players, and a serious challenge can be mounted for the Hogan Cup in 2019 and/or 2020. After all, how fitting it would be if the most prestigious colleges cup of all could come to a school where Bro Thomas Hogan taught for many years.

A little after 5pm, I met the same man I had encountered on arrival in Bansha. His wife wondered aloud would she have to buy a dress for next February’s Westmeath Examiner/Mullingar Park Hotel Sports Awards function, as I said to him, “This was a great set-up for an All-Ireland final”, before we both laughed out loud. Laughter, joy, good humour and pride that lasted all the way to Mullingar in our cars, and many other vehicles, after an afternoon that will live long in the memories of those privileged to have been in Bansha on March 31, 2018. (P.S. Gooch, a Kerry team lost – against Westmeath!)